Athirudra Maha Yajna Conducted in Cerritos CA during May 20 to May 30, 2011 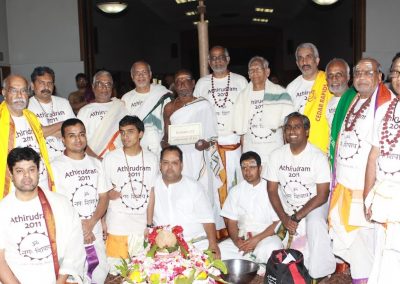 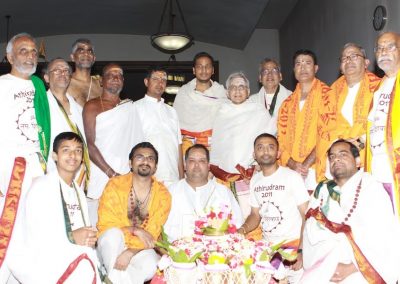 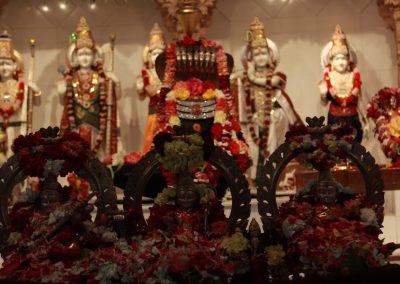 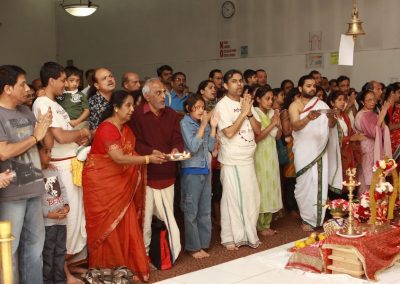 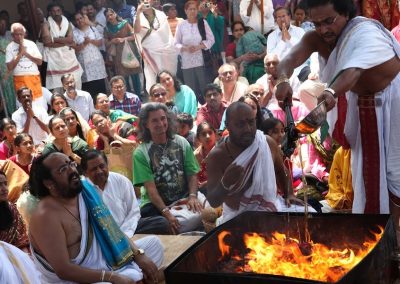 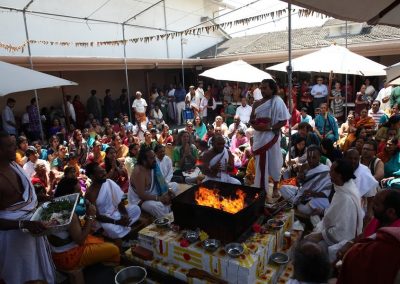 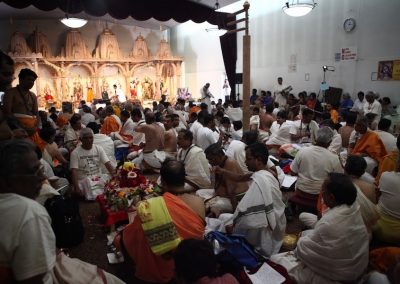 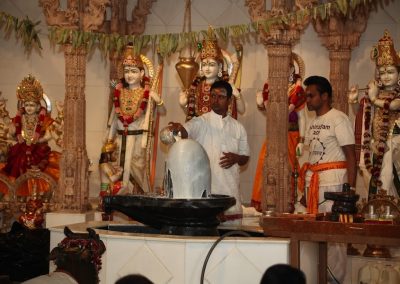 What is Ati Rudram?

Rudra is another name for Lord Siva. References to Him as Lord Rudra Siva are fairly common. Sri Rudram (also known as Namakam) and Chamakam (so called due to the repeated occurrences of the words ‘cha’ and ‘mey’) are among the sacred mantras of Yajur Veda. These mantras occur in the fourth Canto (Kanda) of the Taittiriya Samhita of Yajur Veda.

Sri Rudram is referred to as ‘Shatarudriyam’ because it occurs in all one hundred and one branches (shakhas) of Yajur Veda and because Rudra is described in hundreds of forms. It is also referred to as ‘Rudropanishad’, giving it the status of vedantic or ‘jnana’ literature.

A verse in the Vayu Purana states:

Swami Vivekananda has stated, “Each soul is potentially divine”. All human beings have this potential. The question is how each human being can realize this potential of divinity. Our Sastras tell us that this potential can be realized by everyone through devotion (bhakthi); yoga and meditation (dhyana); selfless action and service (karma yoga); and knowledge (jnana yoga). The Vedic Mantras are meant to help us in all these ways. Sri Rudram is an outstanding text of Vedic mantras addressed to Lord Siva as the Supreme Being. For the majesty of their diction and the sweetness of their sound, Sri Rudram tops the list of all Veda Mantras. The chanting of Sri Rudram invokes Lord Siva’s various attributes and aspects. Sri Rudram is believed to please Lord Siva more than any other mantra.

Chanting Sri Rudram provides the material enjoyment (‘bhukthi‘ or ‘bhoga‘) prescribed in the ‘Karma Kanda of Vedas’ to the devotees. It also delivers the liberation (‘mukthi‘) prescribed in ‘Jnana Kanda of Vedas’. It is stated in the Brighu Valli of Taittiriya Upanishad that “tannama ithyupAsEtha, namyanthEsmai kAmAh”, meaning, “one who worships Him with Namah, shall have his worldly (dharmic) desires fulfilled”. Since Sri Rudram contains over 100 references to the ‘namah’ chant, one who chants (vachasa) Sri Rudram with devotion and offers prostrations to Him with his mind (manasa) will have all his dharmic desires fulfilled by authority of this Upanishadic passage.

As by pouring water at the root of a tree, all its branches are nourished, by pleasing Sri Rudra, through Rudrajapa, all the Devas are pleased. One attains Bhukthi, and Mukthi enjoyment and freedom from the ills of the world by chanting the Sri Rudram with devotion.

A verse in the Vayu Purana states:

The following ways of chanting Sri Rudram (Namakam) and Chamakam are prescribed in our scriptures:

In all of the above functions – Rudraikadashini, Maharudram and Athirudram – homam equal to 10% of the japam (or ‘dasamsha homam’) will be done at the conclusion of the japam. Vasorddhara homam and Purnahuthi will also be performed at the end of the rudra homam.

Before participating in the above Rudram offerings, the Ritwiks must commit to personal cleanliness, purity of thought, humility and devotion to Lord Siva. The Ritwiks must make a ‘sankalpam’ for doing their best in chanting Sri Rudram and Chamakam with proper swaras and intonations (as prescribed in the Vedas) and without any errors. Additionally, the Ritwiks must begin the day’s chanting with ‘Mahanyasa’ mantra which allows them to obtain inner purity and helps them concentrate on Lord Siva.

As the chanting of ‘The Rudram’ proceeds, Siva Abhishekam is conducted simultaneously. The materials (dravyam) used to conduct the Abhishekam for each of the eleven (11) rounds of Namakam chant is prescribed as follows:

Rudra Homam, Vasorddhara, Krama Archana and Kalasa Abhishekam are then performed. This is the procedure followed for all Rudraikadashini and Maharudram.

For the Athirudram, each day’s events, during the first 10 days, in general, include the following in the order shown below:

On the 11th day, after completing the Steps 1- 6 as shown above (namely Mahanyasam, Rudra Japam, Rudra Abhishekam, Rudra Homam, Vasordhara, Krama Archana, and Arathi as was done on the prior 10 days), “The Athirudram” concludes with the following events to complete this grand offering to Lord Siva:

As can be noticed, all such offerings to Lord Siva from ‘The Rudraikadashini’ onwards become progressively more involved culminating in the Athirudram, which is the highest offering to Lord Siva, prescribed in our scriptures.

The program planned for Athirudram-2011 at the Sanathan Dharma temple, Norwalk, California, during May 2011:

The VEDA Circle, the organizers of the Athirudra Maha Yajna at the Sanathan Dharma Temple in Norwalk, California, during May 2011 is planning to conduct the Athirudram with 121 ritwiks in 6 continuous days from May 25 to May 30, 2011 (both days inclusive) as follows:

121 ritiwks will perform 2 rounds of Ekadasa Rudra Japam, abhishekam and homam during each of the 5 days (May 25 to May 29, 2011). This will  equal what is normally performed in the first 10 days of the 11-day Athirudra program described in the earlier paragraphs under Athirudram. On the sixth day, May 30, 2011, 1 round of rudra japam, abhishekam and homam will be performed that is analogous to what is normally done on the 11th day of the Athirudra program discussed in earlier paragraphs. In summary, therefore, the program planned is as follows:

“The Athirudram” concludes with the following events to complete this grand offering to Lord Siva:

What are Yaga and Yajna?

Yaga is the offering of ghee, rice, rice pudding, fruits etc. to the fire (Agni) in the fire pit (Homa Kundam), constructed per guidelines laid out in the sastras, to Indra, Varuna, Navagraha or one’s favorite deity to propitiate the deities and for obtaining desired material benefits. The details of such Yaga are laid out in the ‘Brahmana’ section of the Yajur Veda.

Though ‘Yaga’ and ‘Yajna’ are sometimes used synonymously, ‘Yajna’ has a deeper meaning than ‘Yaga’. Yajna includes the ‘selfless’ performance of Yagas seeking only the overall welfare of the people and the community at large. Yagas are, and can be, performed for the specific attainment of material benefits. The selfless performance of Yagas for Loka Kshema and Loka Kalyana and the spiritual faith and journey towards the realization of the Supreme Being qualify such Yagas as Yajnas.

The ‘Yoga of Action’ or Karma Yoga, Chapter 3, of Bhagavad Gita states that actions performed as Yajna do not attach (as bondage) to the doer, so Lord Krishna tells Arjuna to perform all actions as ‘Yajna’ (vide verse 9). In essence, Lord Krishna suggests that people must first provide offerings to Gods and then keep what remains, so that no karma attaches as bondage to them. Verse 11 provides the interdependence of people and devas.

“Cherish the ‘devas’ with Yajna. May those devas cherish you (provide you with material benefits). Thus cherishing one another, you gain the highest good”

Verse 13 states that one who does not perform any Yajna and keeps all for one’s self incurs sin.

“The good people, living on the remnants of Yajna, are freed from all sins. On the other hand, those who cook food just for themselves eat only sin.”

Yajna and sacrificial offerings are well-known aspects of all religious traditions the world over. Our Vedic heritage repeatedly exhorts us of the need and responsibility on our part to ensure the continued performance of such Yajnas for the welfare of all people.